A unique voice with a blues-rock feel 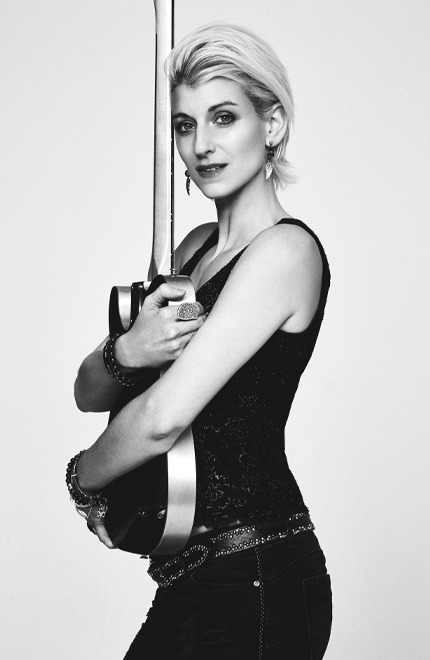 Her first stage appearance was at age 13, since she has trodden the boards of the most beautiful stages in Europe. Gaëlle Buswel with her uncommon style doesn’t go unnoticed. Strongly rooted in the 70’s blues-rock, her inspirations come from Led Zeppelin to Janis Joplin, from Bonnie Raitt to Jonny Lang. After roaming the streets of London and the Parisian metro where she played her music, she released her first opus, Yesterday's Shadow, in 2012. Since, concerts come one after another and she shares the stage with the greatest. Thrills guaranteed!

Born in Alfortville, this French woman was lulled by 70's rock thanks to her parents' vinyl records: Led Zeppelin, Joe Cocker, Queen, Neil Young... This fascination for music led her to perform on stage very early on, at the age of 13 in the band Cam On, where she gave her first concerts in France, Belgium and the United Kingdom. Later, she composed her first songs and went to London to play alone with her guitar for several months. She then decided to perform in the Paris metro, with the firm intention of making the public transport users sing in a place known to be morose. She began to build a fan base and was later compared to Joan Baez and Melissa Etheridge.

Her first songs were very personal and were included in her first album Yesterday's Shadow. The eponymous track was ranked #1 in the US on the Concert Blogger website, and was broadcasted on W9 or TSF Jazz in France. Her 2nd album, Black to Blue, released in November 2014, attracted a new audience and North America took notice of her. In the summer of 2015, she explored the United States for 45 days with her guitar in order to meet people and see what would come of it. A decisive meeting occurred in Austin, Texas, where David, a musician, offered her one of his songs: No One Else. After an unforgettable jam, the singer promised to record the song. This meeting led to the writing of her third album, New Day's Waiting, released in 2017.

She is an artist cut out for the stage who has toured in Europe and the United States, in the biggest festivals, and who has made a name for herself by opening for the greatest: ZZ Top, Vintage Trouble, -M-, Beth Hart, Louis Bertignac, UB40, Ringo Starr... Just to name a few.

Her new album, Your Journey, was released on March 26, 2021. Recorded in the prestigious ICP (Brussels) and Abbey Road (London) studios, it has already been acclaimed by the press: Rolling Stone Magazine, Voici, Le Parisien, France Bleu, and George Lang's Nocturnes show on RTL. With this new album she will for sure deliver a great live performance. Take notice of her Parisian date at the Café de la Danse on November 27, 2021!