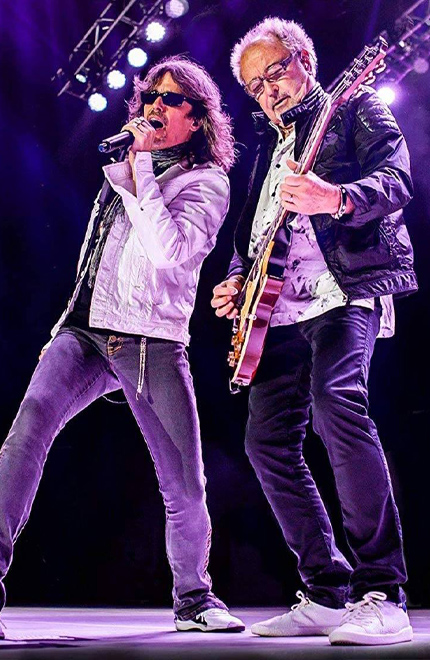 In over 40 years of career, Mick Jones and his band have not stopped! With over 75 million albums sold and sold-out tours, Foreigner has earned a place of honor in the pantheon of rock 'n' roll legends. They're responsible for some of rock 'n' roll's most enduring anthems, including "Juke Box Hero," "Feels Like The First Time," "Urgent," "Head Games," "Hot Blooded," "Cold As Ice," "Dirty White Boy," "Waiting For A Girl Like You," and the world's No. 1 hit "I Want To Know What Love Is.

At the origin of the band, we find its leader Mick Jones, who is not only a composer and guitarist but also a producer having worked with the greatest such as Eric Clapton, Johnny Hallyday, Ozzy Osbourne or Billy Joel. The current line-up also includes Kelly Hansen as lead singer, Jeff Pilson on bass and Tom Grimbel as multi-instrumentalist.
While singer Lou Gramm left his personal mark on the band's music, Hansen's arrival in 2002 marked the beginning of an exceptional musical renaissance that will appeal to both old and new fans. Indeed, in addition to his impressive vocal abilities, Hansen is a true showman who captures attention from the first notes. With renewed direction and energy, Foreigner released the album "Can't Slow Down" in 2009 and entered the Top 30, carried by two Top 20 singles, the beautiful ballads "In Pieces" and "When It Comes to Love".
Foreigner's relevance is confirmed by their numerous hits featured in movies like "Rock of Ages," "Anchorman 2," "Magic Mike" or "Pitch Perfect," and in video games including the mega-hit "Grand Theft Auto V." "I Want to Know What Love Is" was also featured in the latest episode of Orange Is the New Black. This title has been covered by many artists such as the Shadows, Mariah Carey ... Or even the Enfoirés or Richard Clayderman.
Despite the line-up changes over the years, the current line-up shows on stage a very intense energy and connection with the audience. The band continues to tour all over the world and doesn't seem to be ready to hang up! In France, we remember their performance at the Palais des Sports with Journey, as well as their appearance at the Guitare en Scène festival in 2014. Don't miss them on their next visit!