A concert directed by Andrea Morricone 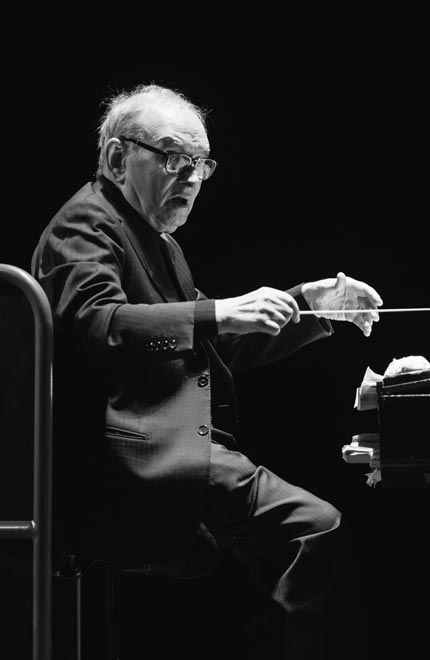 Ennio Morricone's score is unclassifiable. This virtuoso with a strong character, an avant-garde and audacious composer, revolutionised the seventh art with imperial and unexpected orchestrations. His life, his works: the most energetic Mæstro breathes for music.

"I will work until death, and afterwards I will rest". That's the way he was, Ennio Morricone. An insatiable explorer of new territories, the Mæstro wrote his life to the frantic rhythm of his compositions. With him, the images take on another dimension, finely expressing unsuspected emotions. The heartbeat accelerates. The eyes get soaked. Ennio Morricone, a prolific and rigorous genius, knows how to sculpt scores to make hearts shiver.

No, Ennio Morricone's work is not just about cowboys conquering the west. Moreover, there is no point in barbering it with Sergio Leone or daring to make any reference to the Spaghetti Western : you would be in danger of getting a beautiful flight of green wood with an Italian accent. For if the Mæstro hates so much to dwell on these subjects, it is because his creativity with a thousand nuances has completely turned the world of cinema upside down, far beyond the inevitable The Good, the Bad and the Ugly.

His work is unclassifiable, escaping with force from the guns of the Far West to be on first-name terms with the sublime and to destroy all artistic borders. The King of Trastevere, the colourful district of Rome, the major composer of his century, thus plays on his intuition to break the codes with inventiveness, rigour and abundance. Behind his dark glasses, as strict as a man, Ennio Morricone does not stop at anything. This trumpet player, who has collaborated with the greatest, from Quentin Tarantino to John Carpenter, unreservedly challenges melodies, rhythms and images to brilliantly bring forth treasures of orchestration beyond convention.

Before the first acts of glory

Just married to Maria Travia, who will accompany him throughout his career, the young Ennio Morricone makes arrangements for RAI. He gradually turned to film music, and let himself be tempted by some surprising collaborations, such as with Mireille Mathieu or Milva.

For a handful of dollars

The Good, the Bad and the Ugly

This is Sergio Leone's major work, and one of the key moments in Ennio Morricone's career: The Good, the Bad and the Ugly. By creating a perfect symbiosis between music and image, the geniuses of the Trastevere district upset the world of cinema, with an Italian-style western, led by the intrepid Clint Eastwood.

In his characteristic style, Terrence Malick presents his second film, The Harvest from the Sky. He calls upon the Italian to imagine the musical universe. Here again, Ennio Morricone's composition stands out. For the first time in his career, the Roman is nominated for the Oscar for Best Film Music. He is also a winner of the British Academy Film Awards.

This is a prized award in the film world: for Ennio Morricone, the third nomination will be the right one. The Italian composer won a Golden Globes Award for the music to the film Mission, by director Roland Joffré. The following year he won a Grammy Award for his participation in Brian De Palma's The Untouchables.

The cinema says thank you

There are great rewards for thanking great artists. That year Ennio Morricone was awarded an Oscar of honour for his entire career. This distinction demonstrates, once again, how profoundly the Italian composer has changed the world of cinema.

The Oscar, here at last!

It took almost forty years between his first nomination and his first real Oscar distinction. It's done: Ennio Morricone has definitively marked the History of Cinema, with the Oscar for Best Film Score for the film The Eight Bastards by Quentin Tarantino. "There is no great music without a great film", he declared, humbly.

At the age of 90, the conductor invests Bercy one last time for a last concert of anthology. Two hours at the side of the Czech National Symphony Orchestra to thrill an audience acquired with some of his greatest successes. This undisputed master will indeed have worked until his death, as he will die on 6 July 2020, leaving the world of cinema orphaned by one of its greatest artists.

I'm 53 years old and I've been waiting for this concert by Ennio Morricone for at least forty years! The master was there, and the beautiful and fantastic soprano. The show was a success, we were transported from beginning to end. We even have the right to three encores, and the conductor can't manage to leave the stage.

Philippe, after the performance at Bercy

Ennio Morricone is an outstanding composer, known throughout the world and recognised by his peers. In one career, he has completely reinvented film music. So imagine when Ennio Morricone appears before you, with an army of exceptionally talented musicians. It's always a great moment! We are so proud to have contributed to the tours of this modern-day Mæstro.

Its name alone symbolises the golden age of the soundtrack. Ennio Morricone was so successful in revolutionising this shadowy discipline that his popularity with the general public far outstrips that of his colleagues.

When the lights come back on and Morricone rises, it is a new standing ovation; when he crosses the hall of the Cinémathèque, he is applauded by a double hurdle of honour. Fans rush to get autographs. The Morricone-mania is always lively.