His world is pop ! 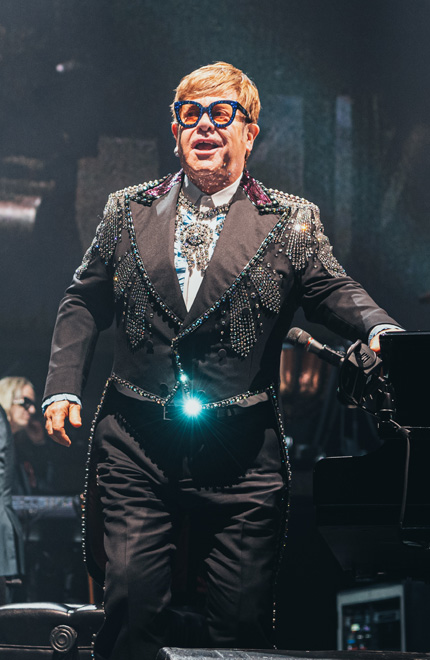 With Elton John everything is pop : life, love, spleen. Since the end of the sixties, the gifted child of Pinner, a quiet town in Middlesex, threads the lawn of eccentric romance. Piano set on fire, quirky costumes, and funny glasses : this English showman is all about breaking conventions.

Elton John is a contrasted character. In a perpetual quest for self-confidence, this showman and die-hard perfectionnist, self-concious excentric and advocate for the LGBT cause, flickers endlessly between bright colours and inner darkness. His glory hides an inner storm, his joie de vivre conceals his doubts. It must be this day-to-day ambivalence that drove this golden voice British singer, the Michaelangelo of pop music, to reach for the stars without looking back.

For Elton John, performing is something to live for. His grandiloquence, his extravagance, his fears: behind each jewel of his discography, the artist, generous and committed, lifts the veil on his complex personality and his tortuous feelings. His excessiveness is a stopgap for his uncertainties. His hypersensitivity soothes his modesty. Even his kitsh costumes reflect the revenge of a young teenager long forced to wear dull clothes. It's almost a fight or flight reflex: confronted to his shadow, Elton always reveals his creative drive, between gentle ballades and overexcited sounds.

Let's put it in words : this outstanding melodist, exceptional pianist and unfailing admirer of Little Richard, has not sold more than 300 million records by accident. He has the gift of electrifying the crowds and waltzing through the stadiums. Thus, with his lyricist and lifelong friend, the Englishman Bernie Taupin, Elton John built his legend, making it a point of honour to add colour to his tumultuous life, marked by periods of excesses and downfalls. His obsession: to make it as pop and unifying as possible. For Elton John is one of the greats, Elton John is a giant. 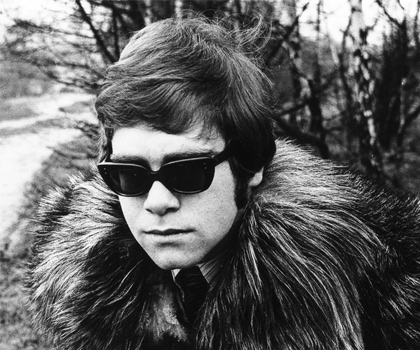 On this day of June, Elton John, an anonymous young man from Pinner, opens a copy of the New Musical Express, a Londonian music newspaper. A classified advertisement is about to change his life : Bernie Taupin, songwriter, is looking for a composer to give life to his texts. This is the start of a long friendship and of an unexpected journey. The two friends are now inseparable ! 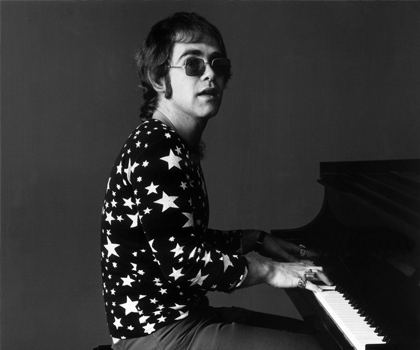 A few months after the release of his first album Empty Sky, Elton John triumphs. The ball is rolling and hits keep coming out one after the other, with two resounding albums in 1971 and 1972 : Tumbleweed Connection and Madman Across the Water. Elton John composes at a fast pace and takes the top of the charts. It is lift-off for Rocketman ! 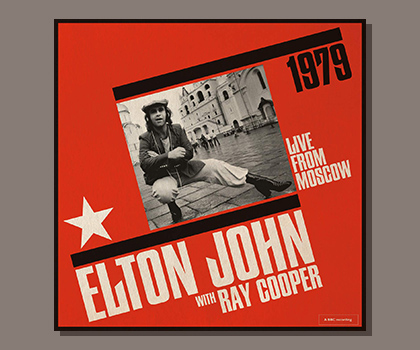 Elton John, releasing hit after hit and enjoying global success, is the first western artist to tour in URSS. In his own way, he is part of History, colliding two conflicted worlds. The journalists of that time wrote « For the first time, an English-speaking music star performed in front of a Russian audience, more familliar with pirate tape cassettes and broadcasts picked up by foreign transistors ». 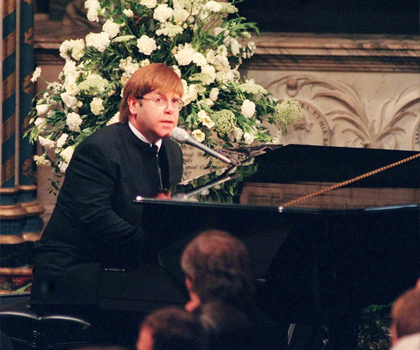 Long-time friend of Princess Diana, another icon trapped in a world of fame, her death left a void in the singer's heart, who is a world-wide superstar. Elton John alone accounts for 2% of the music industry. In her memory, he released a tribute version of his song Candle In The Wind, written in 1973 in homage to Marilyn Monroe, this version is once again a huge success.

Elton John : a man of compassion

It is unheard of : for the first time, the greatest artists of their time get together at the Wembley Stadium, London, and take part in the Live Aid benefit concert. The aim is to raise enough funds to alleviate the Ethiopian population suffering from famine. Elton John, naturally, contributed to this collaborative effort and let his pop music shine for charity. He performed in front of a massive crowd, between the sets of The Who and Freddie Mercury.

« Jesus would have supported gay marriage », claimed Elton John in 2013 before marrying his civil partner David Furnish a year later. Thanks to their relationship, the Middlesex genius publicly came out and became an LGBT icon and advocate for the cause. For sure, behind his electrifying shows, Elton John has contributed to change morals all over the world. Do not forget : Love is pop! 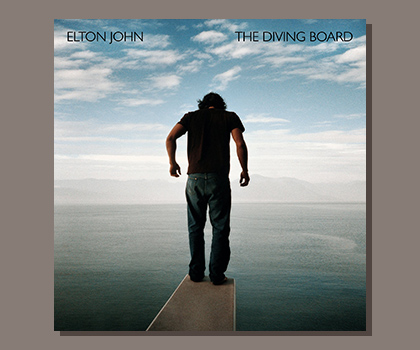 Elton John and the creative spree

How many artists can boast about having released 30 albums, each of them being as popular as the one before? This is the epitome of a career, and Elton John has succeeded brilliantly. The Diving Board, issued in September confirms the pop star status of the English artist. The album stayed at the top of the British charts for almost two months! 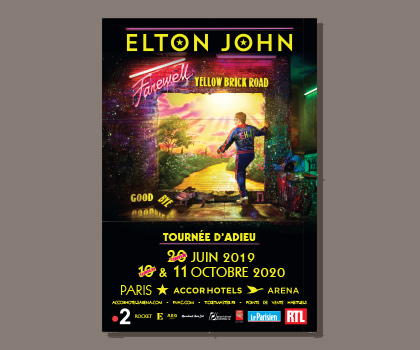 Elton John will be missed

Everything must end. Elton John has annonced his farewell tour. For three years, the artist will travel the world and for the last time he will sing the most beautiful hits in his repertoire in front of his beloved audience. In France, 60 000 people will gather in front of their idol for a series of four unforgettable shows. His fans are not bereft of the singer's legacy; they can comfort themselves with a beautiful biopic produced during his lifetime. RocketMan, released in 2019, takes us into the artist's dreamworld and was publicly acclaimed. Before bowing out, this great man was awarded France's highest civilian award, the Legion d'Honneur by president Emmanuel Macron in honnor of his career and activism.

Elton John's voice and stage presence have stayed the same. Or maybe they didn't. He sings with more intensity, more passion. It feels like time has no hold on his talent, he brings back our youth by singing his greatest hits.

Lily, after a concert at Musilac, Aix-Les-Bains.

We could write a whole book about his career and his personality. Elvis was the King, but Elton is the emperor of pop music. Seeing him taking the stage is a very special moment, deeply moving especially given the fact that he is bowing out. Sir Elton John is a legend who has left his mark on generations of fans. Every hit carries the memories of an era, of moments shared with friends, of good times. He is part of our lives!

Elton shines bright when he plays the piano, wearing a sparkly grey jacket and dashing blue glasses. It is time for music and hit songs. It is relevant, smart and deeply moving.