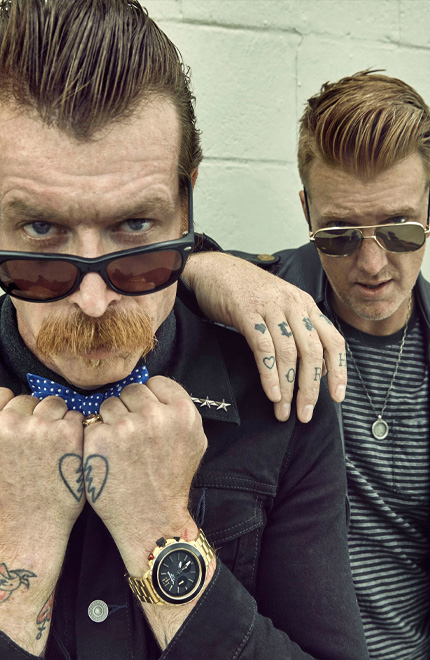 What would a cross between the Eagles and the extreme sounds of death metal sound like? What started out as a joke by Josh Homme has become a band that delivers very effective 70s rock, sometimes garage-bougie, sometimes glam, thrilling the audience from the first notes. In concert, the band delivers energetic and hypnotic performances, without taking themselves too seriously. And we ask for more!

The band was formed in 1998 in Palm Desert, California, under the leadership of Josh Homme (Queens of the Stone Age), Tim Vanhamel and Jesse Hughes. The latter, a former journalist, remains the only permanent member of the band, Homme being involved in QOTSA. Despite the curious name, this is not a death metal band but a garage rock band with heady rhythms and saturated guitars. The band's first album "Peace, Love, Death Metal" was released on March 23, 2004.

In an interview for MTV news in 2003, Josh Homme describes the band's sound as "a combination of bluegrass with powerful drums and Canned Heat-like vocals. In April 2008, Nike released its new "Take it to the Next Level" ad campaign for the T90 soccer shoe. The ad is directed by Guy Ritchie with the song "Don't speak", allowing the group to establish its reputation.

The third album of the group "Heart On", whose first single is "Wannabe in L.A.", was released on October 28, 2008. In 2012, for the launch of Windows 8, Microsoft uses "I only want you". In 2015, the album "Zipper Down" is released, which receives a good reception both in the press and by fans. This success is marred by the Parisian terrorist attacks of November 13, 2015, one of which occurs during their concert at the Bataclan, killing 90 people in the room. The group, forever marked by this event and maintaining a strong link with Paris, decided nevertheless to return to the stage on December 7, 2015 at the concert of U2 at the Accor Arena. Visibly moved but happy to meet the public again, it is the beginning of the rebirth for the group and its public, which has never let it down.

In early 2016 they announce their intention not only to complete their concert of November 13 (and the dates that were planned afterwards) but also to give other dates in the hexagon. Tickets for the "Nos Amis Tour" sold out very quickly. In 2017, a documentary retracing the concert of November 13, 2015 is released under the name "Eagles of Death Metal: Nos Amis (Our Friends)". The band continued with concerts the same year as the opening act for Mastodon. In 2019, the band performs in France, at Hellfest, visibly in shape and happy to return to France for the first time in 3 years. Probably the first steps of a new album and a tour, a sign that the band will never hang up... Peace, Love, Death Metal !