"Crooner" with a velvet voice
Ecouter 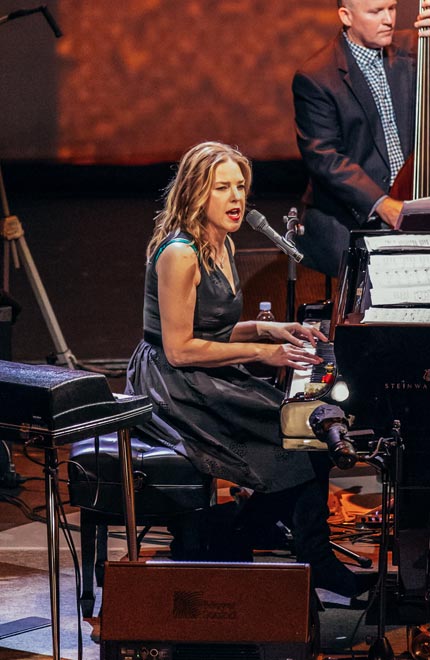 Behind this pretty, shy and discreet woman who willingly lets others express themselves in her place is one of the most famous jazz pianists and singers in the world. A success that she owes not, as her detractors like to say, to her angel face, but to her immense talent and her always subtle understanding of a very demanding genre. It must be said that she exercised and refined her innate sense of tempo with renowned mentors: Ray Brown and Jimmy Rowles.

Queen of the cover versions, she does not produce classical jazz, no matter what the critics say! The woman who sometimes forced her voice to stick to standards has now understood that this was not her strength. "I don't know if I'm a singer, but I'm sure I'm a pianist," she now says with conviction. And for good reason, her music, far from being a passage in force, is a sensual, gentle and intelligent caress, which touches our sensibilities like a long embrace.

For Diana Krall is also a master in the art of seduction. In a classical jazz register, this is even where she excels. Her deep, deep voice with a few warm notes and her improvised piano flights of fancy transport her audience into a hushed atmosphere. In turn, this "crooner" builds an intimate cocoon or imposes a heavy breathing and a long awaited serenity. You can then imagine yourself sitting by the fire, listening attentively to her piano, which plunges you into a welcome nostalgia, on the verge of happiness. 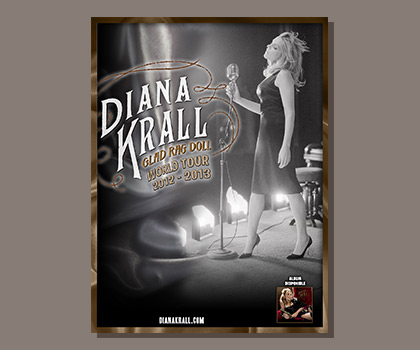 From Nanaimo's restaurants to the prestigious Berklee

Coming from a family of musicians, Diana Krall was almost born with a piano under her fingers as she began her apprenticeship at the age of 4! By the age of 15, she was already playing in several restaurants in her hometown and two years later, she won a scholarship to study at the Berklee College of Music in Boston. These were more than promising beginnings for the budding artist. 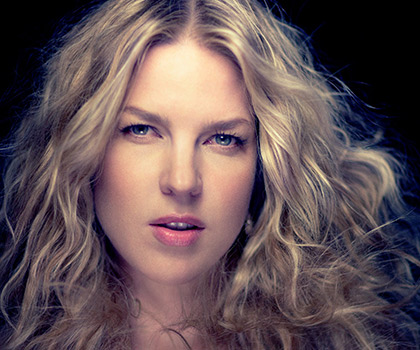 The beginning of a long friendship

Back in Canada, she was spotted by double bassist Ray Brown, who put all his energy into convincing her to move to Los Angeles to launch her career. It was there that she met her second mentor, Jimmy Rowles. With him, she further honed her piano skills and learned to sing before signing her first album in 1990. 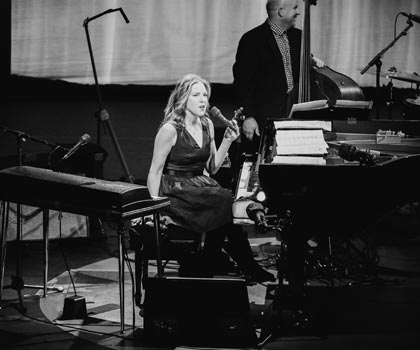 Paris, its city of heart and success

Married to the British musician Elvis Costello, it was in Paris, with whom she fell in love, that she spent her honeymoon. And the city gives it back to her! Her concerts are always filled with an attentive and conquered public. It is to pay homage to her that she recorded in 2001, Live in Paris, her only concert album. A real success that will earn her the second Grammy Awards of her career in the Best Vocal Jazz Record category.

Surprising association with a country master

In 2004, the singer was already taking the wrong path when she released her critically acclaimed opus of original compositions, The Girl in The Other Room, for the first time. This time, she accepted Neil Young's invitation for a series of concerts in defence of Indian rights. It was a very positive experience for the artist, who later said: "It made me realise that I didn't have to stay in my character as a jazz singer, that I could do whatever I wanted as long as it was sincere". She put this statement into practice in her next album, Wallflower, which included covers of major pop hits.

Everything that makes the success of his records is there: a deep voice that wanders through an infinite range of styles, a group of erudition that sets the bar very high from the outset and the variety of songs sung tonight. We will hear in a folk blues register the Tom Waits, the Dylan, the beautiful A case of you by Joni Mitchell. But also great classics such as Fly me to the moon or Cry Me a river which she interprets after having polled the audience.

Sami after a concert at the Palais Longchamps in Marseille

No artifice for Diana Krall, a singer and pianist with raw talent who delivers a modern version of jazz, full of subtlety and emotion. The woman who is affectionately known as the Nat King Cole now fully accepts her status as a jazz icon and master of rhythm. Whether in the studio or on stage, she skillfully bends all genres to fit her unique style and we ask for more !

For her first concert in a series of three at the Olympia, as a quartet, Diana Krall puts the audience on its feet. At arm's length, because she alternates standards, songs of her own making and a few tunes from Brazil that she has always liked to play, like a revue leader. At arm's length, because her outstretched arms display such an efficient musculature for the most restrained tempos, pianissimo, the phrasing beaded into the ballads, in short, the music.