The chapter after Pink Floyd!
Ecouter 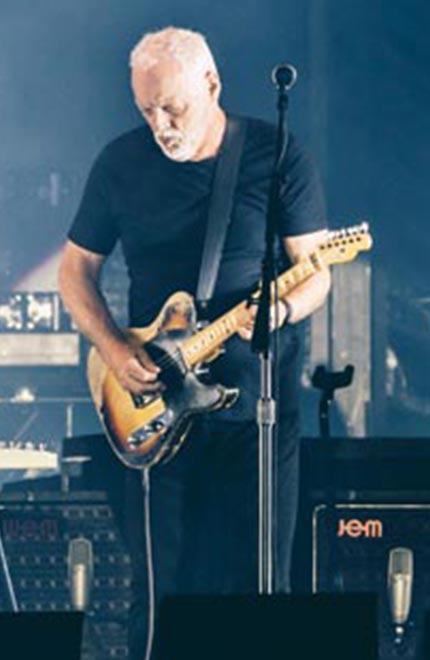 Let's start with the basics: no one is as good as David Gilmour. This legendary guitarist, the architect of Pink Floyd's incredible success, has taken his Fender through the ages to pave the way for flights beyond reach. But should we still introduce this man of mad genius?

Each melody is meticulously cut, each appearance perfectly calibrated. David Gilmour embodies perfection. With white hair and black clothes, the guitarist, world-famous for taking Pink Floyd to stratospheric heights, hasn't lost a single ounce of his superb. The stage is his recreation, the studio his playground. Leaving the past to rest in peace, this exceptional artist, a great philanthropist in his spare time, now focuses on the present, drawing a line, suspiciously deliberately, on the adventure of his life.

From now on, it is time for his epic in solitude. Discreet by nature, and far from his farm in the south of England, David Gilmour impresses with his extraordinary technical skills and his velvety voice. Here, there's no talking about it. The master of Grantchester tunes his Stratocaster to propel, with finesse and precision, his deepest convictions and reflections. Carried by his wife Polly Samson, with whom he writes most of his lyrics, David Gilmour refines, album after album, the contours of his legend.

For if he has revolutionised contemporary music, making the strings dance in a very personal style, the natural heir of Pete Seeger and Hank Marvin does not rest on his laurels. Aerial solos, supra-aesthetic choruses, psychedelic rhythms: the dosage is on a first-name basis to build a music lover's paradise. Let's repeat it over and over again, David Gilmour, giant among giants, is the quintessence of excellence.

At Nick Mason's request, David Gilmour joined Pink Floyd. He quickly made his mark, thanks to his unrivalled technical skills and formidable creativity. With his very personal style, he actively contributed to the band's meteoric rise to fame, becoming an English rock icon, thanks in part to the incredible album The Dark Side of the Moon, released in 1973.

Thunderclap! Roger Waters plaques the door of Pink Floyd. David Gilmour now has the field clear and takes the reins. The band sets out to conquer a revival, which leads it to the craziest heights with the release of The Division Bell in 1994.

On the island of excellence

After a final appearance by Pink Floyd, David Gilmour decides to focus on his solo career. On his sixtieth birthday, he unveiled the album On an Island. For the occasion, he brings together his lifelong friends, Richard Wright and Phil Manzanera. 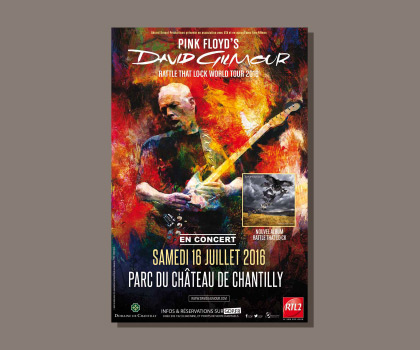 It took him ten years to write this album, ten years! Every note is weighed, every word is reflected. In September, Richard Wright presents Rattle That Lock, his fourth album. The reviews are excellent and the record gets noticed in France, thanks to an original hijacking of a famous railway jingle: we let you guess which one. The tour that follows is exceptional, with a mythical passage in the gardens of the Château de Chantilly, and a few days later at the Saline d'Arc-et-Senans.

This concert at the Château de Chantilly was exceptional. A sumptuous venue and an unforgettable moment with David Gilmour at the top of his art. I am not ready to forget this evening. He gave us a great show, with an extraordinary guitar playing. What a slap in the face!

Patrick, after the concert at the Château de Chantilly in 2016

He is, by far, one of the best guitarists of all time. David Gilmour's creativity and outstanding technique have clearly made music history and influenced generations of artists. It is therefore natural for us to collaborate with this modern-day genius. What a pleasure to see him on stage !

While any hope of reuniting the remaining members of Pink Floyd seems doomed to ultimate disappointment, guitarist David Gilmour sends an elegant and rather copious nod to his fans with this concert.

David Gilmour's Live is a grandiose sound and light show, with lasers and pyrotechnic effects, but it's the interpretations of the songs that catch the attention. The set list includes compositions that have marked his career.