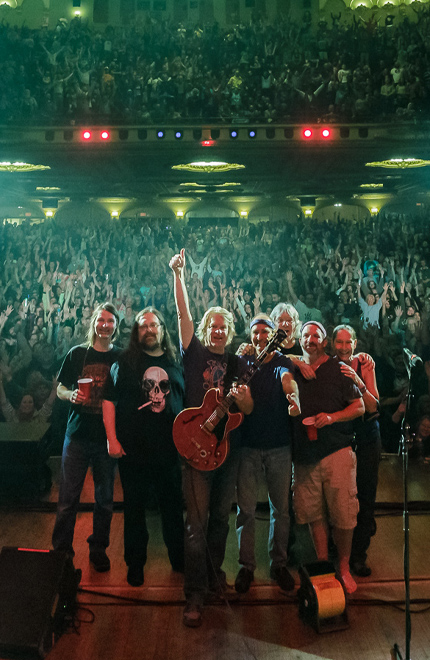 With over 3,000 shows worldwide in 20 years, Dark Star Orchestra is definitely the band that keeps the Grateful Dead legacy alive on stage! Based in Chicago, the band pays a singular tribute to the California band's incredible catalog each night. Members of the Grateful Dead have also been seen on stage with them, such as Bob Weir, Phil Lesh or Vince Welnick. A tribute that will definitely please the fans of the first hour and the new generation!

The band tries to reproduce the sound of the Grateful Dead as closely as possible, using for example specific equipment to obtain a sound similar to Jerry Garcia's guitar, or Donna Godchaux's vocal harmonies. After the band's first few concerts, the reviews were rave reviews, with the Washington Post calling it the hottest Grateful Dead tribute act going. The audience only grew and the biggest American festivals hosted their performances: Bonnaroo, Milwaukee's SummerFest or Mountain Jam. In addition, the band holds its own annual festival, called Dark Star Jubilee.

The band's concerts, in addition to rediscovering Grateful Dead classics, allow its members to express their musical creativity by improvising. Rob Barraco, the band's keyboardist and vocalist, says it's "a chance to recreate some of the magic we've been given over the years and offer something that even the most seasoned fans have never seen live.

Without a doubt, Dark Side Orchestra is paying the most beautiful tribute to the Grateful Dead and we can't recommend enough to experience it live soon!