The heroes of Woodstock!
Ecouter 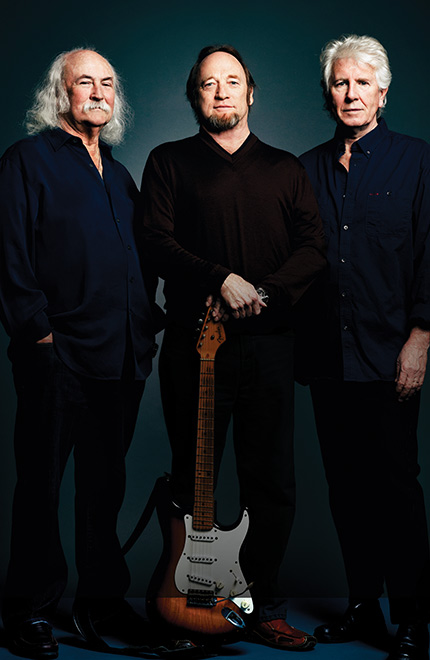 When former members of The Byrds, The Hollies and Buffalo Springfield meet, the gentle harmonies of the sixties sparkle, leaving an indelible mark on the history of contemporary music.

When David Crosby, Stephen Stills and Graham Nash formed this supergroup in 1968, they probably couldn't have imagined the wave they were about to unleash. The facts are the facts: these Woodstock heroes, acclaimed conductors of an unprecedented cultural revolution, literally changed the course of events. Behind these relentless riffs and stunning harmonies, the hearts of hippies in America and elsewhere never resisted, gently capsizing in an ocean of love.

Time passes, the legend remains. White hair, sharpened moustaches: the three companions, long accompanied by the intrepid Neil Young, always hide behind their soothed faces of today, the ardour and revolt of yesterday. Anything is good to make the powerful waltz, as when they recorded in 1970, and in a few hours, Ohio, in response to the death of four students killed by the National Guard during a riot. It's written in marble: at each appearance, Crosby, Stills and Nash put down strong and fair words about the injustices and violence of their time.

Today, nothing has changed, neither their style nor their outspokenness. Unfiltered, but always with a certain elegance, the three accomplices rise to the occasion as soon as current events require it. Because these inveterate peacemakers, refusing the soup that justifies wars, always find the right formula to advocate tolerance and communion between peoples. Their sweet anger makes contestation poetic. Their innumerable disputes and convoluted reformations forge the myth. Worst friends, best enemies: half a century after their honeymoon, David Crosby, Stephen Stills and Graham Nash still have a lot to say.

The meeting of giants

Having just left the Byrds, David Crosby was put in touch with Stephen Stillls through Mama Cass and the feeling was good. It is then that one summer evening, on top of the Hollywood hills, they decide to embark, together, on a new adventure. Graham Nash is there: he joins them immediately.

After Woodstock, never seen before

After the success of the first record, which sold 4 million copies, Crosby, Stills & Nash became the attraction at Woodstock. They are then the heroes of the hippie community. Their second album is a triumph. Joined by Neil Young, the quartet is making music history.

Tour of the stadiums

Internal conflicts emerge, which will help write the legend of Crosby, Stills & Nash. However, these rebellious hippies, after a separation of a few months, take off again towards the stratosphere. In 1974, they embarked on an unprecedented stadium tour. More than a million people joined the reunion !

Between separation and strokes of genius

After several separations and reformations, Crosby, Stills & Nash, accompanied by Neil Young, release Looking Forward, their new album. Punctuated by a successful tour, the record brings the band back to the forefront. Within the band, the entente is fragile, but the genius is solid. 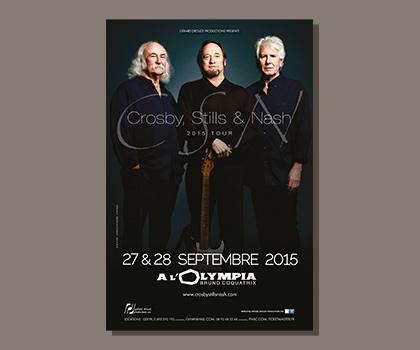 On the occasion of the release of CSN 2012, Crosby, Stills & Nash show that they still have a lot to say. They take advantage of the song Almost Gone to pay a committed tribute to Bradley Manning, a young American soldier accused of sending confidential documents to WikiLeaks.

I am an unconditional fan of this mythical band. It was so nice to see them together. Their music didn't take a wrinkle, and the audience was boiling hot. It was a superb moment, with a string of hits that everyone took to their hearts.

Jean-Pierre, after the concert at the Olympia

What a mythical band! David Crosby, Stephen Stills and Graham Nash carry, through their music, a magic and strength that cannot be explained. Through their sounds and their commitments, they have made history. It is therefore a pleasure to produce their concerts as soon as they take to the stage together.

Although even today, together or separately, they still fill any Parisian venue without a problem, it is hard to imagine the popularity that Crosby, Stills, Nash & Young enjoyed in the 1970s. They were quite simply the new gods of popular music.

Crosby, Stills & Nash have left their mark on the history of rock music. The purity of their vocal harmonies, their writing talent and their commitment characterise their entire work. They are the voice of the Woodstock Generation.