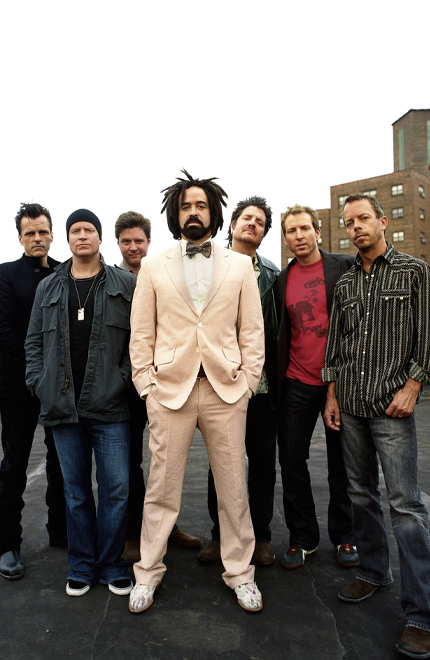 For over twenty years, the Counting Crows have delighted fans around the world with their unique approach to the world of alternative rock. Nominated for Grammys and Oscars, the band has sold over 20 million albums and is considered a reference on stage with their leader, the timeless Adam Duritz. A sure value not to be missed live!

Adam Duritz and David Bryson met in San Francisco in 1989. They played their first gigs as a duo in small local clubs. In 1991, they recruited their friends Matt Malley, Charles Gillingham and Steve Bowman to record demos. They got a recording contract with Geffen and in September 1993, they released their first album August And Everything After. This first effort contains the now-ubiquitous Mr. Jones, which will be broadcast on MTV and will allow the album to sell 6 million copies and the band to open for the Rolling Stones. The band will continue with critically acclaimed albums such as Revovering The Satellites or This Desert Life.

2002 is the year of maturity with the album Hard Candy. However, this album will be followed by the departure of Ben Mize and the band will take a break for some time. It is only in 2008 that the Counting Crows return to the front of the stage with Saturday Nights & Sunday Mornings, which reaches the third place of the American charts. This album, using two producers, is more rocky and calm at the same time.

The band never disappoints in concert and releases the live album August And Everything After - Live to prove it. It will be followed by an album of covers called Underwater Sunshine. But the band has never lost its legendary creativity: in September 2014, it released a new album called Somewhere Under Wonderland. The guitars are still ringing more beautifully and Adam Duritz's expressive voice is intact despite the passage of time.

In 2020, during the COVID-19 pandemic, and deprived of touring, Adam Duritz starts hosting cooking videos through his Instagram stories, which meet with some success. But it wasn't long before the band was back in the studio: Elevator Boots was the first single from the EP titled Butter Miracle, Suite One, released on May 21, 2021. Duritz told Rolling Stone that a second EP, Butter Miracle, Suite Two, will be released and will together form a full-length album. The band is preparing for their return to the stage, to deliver performances as memorable and passionate as ever!