In the footsteps of Elvis !
Ecouter 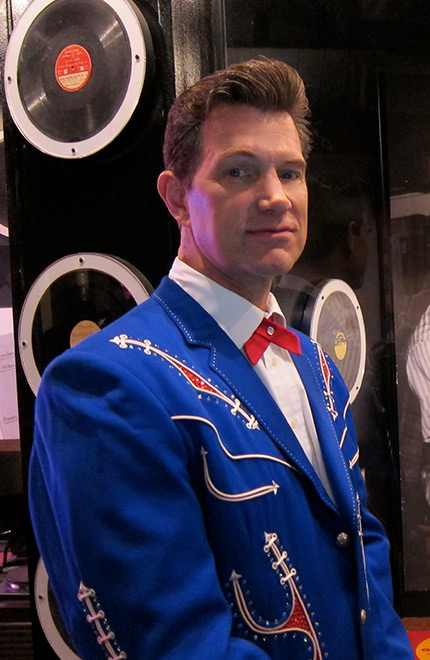 Striking costume, slicked-up hair, powerful voice : Chris Isaak, a child of the sixties cradled by the ardour of Elvis, swims against the current to celebrate a rock with the scent of yesteryear. This crooner from California, optimistic by nature, plays with the ambient spleen to build an extraordinary musical empire.

Out of fashion, Chris Isaak, worthy heir to Dean Martin, Bing Crosby and the great Elvis Presley, is a headwind, gracefully freezing time. This contemporary cowboy, ready to draw his second-hand Gibson J-200 at the slightest emotion, makes a mockery of trends and eras. A charming smile, an aerodynamic hairstyle, clothes in electric colours: the rough diamond from Stockton, a discreet town in California, sets his suave and languorous voice to velvet melodies, in the tradition of his childhood heroes, like Leadbelly and Hank Williams, whom he used to listen to on an old, barely functional electrophone.

In a way, Chris Isaak, who comes from a very modest family, has always been one step behind, and there lies the paradox. Because the American crooner, a former talented boxer, whose nose still bears the stigma, always knocks at the right time, and without warning, to get rid of the mass with hits that came out of nowhere, that nobody believed in. Blue Hotel was announced as a commercial failure by its label at the time, Wicked Game as a shipwreck: they became worldwide successes. Yes, this unfailing lover of Roy Orbison, who defines himself as the median between a poet and a redneck, could have fallen into oblivion many times over. But the legacy he carries, and has been sculpting since the eighties, is his balancing point: Chris Isaak will never fall.

Thus, always in good humour, this dandy, extravagant by nature, breaking with the codes of political correctness, wonderfully revives the spirit of the sixties, injecting it with a dose of timeless modernity. Frugality, serenity, romanticism: Chris Isaak plays with adjectives to transform his adventures and anecdotes into a moving and energetic tribute to the rockabilly of all time. 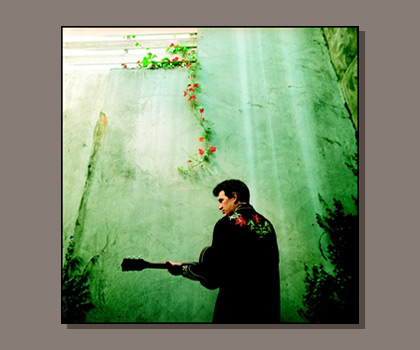 Until the first eclipse

Chris Isaac is spotted by Warner Bros Records, on which he releases his first album. While the record was well received by the critics, commercially speaking, the failure was hard to swallow. But the following year, the unexpected salvation came from France. Chris Isaac succeeds in his gamble: the title Blue Hotel, from his second album, is a hit, first in France, then all over the world. 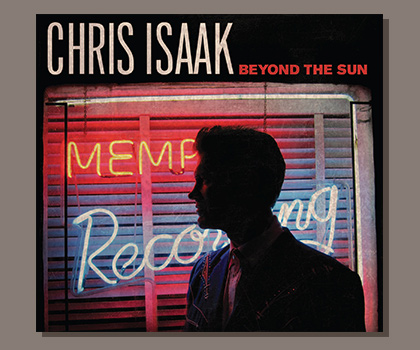 Bounce back from oblivion

His career is slowing down dangerously. His label is about to turn its back on him. While the release of Heart Shaped World seems to be a failure, director David Lynch is going to change everything. The title Wicked Game is selected to appear in the soundtrack of the film Sailor and Lula. The success is planetary. When they tell you that Chris Isaak always bounces back... 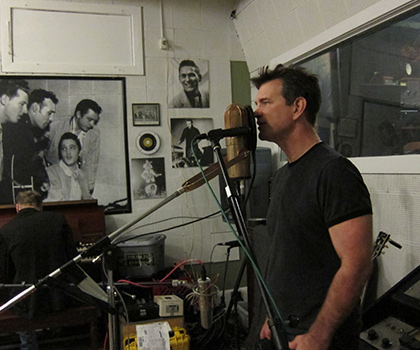 From the guitar to the cinema

In parallel to his musical career, Chris Isaac appears in several films. In 1991, he played a SWAT policeman in Silence of the Lambs. This was followed by more or less notable appearances in, among others, Twin Peaks, Friends or A Dirty Shames. 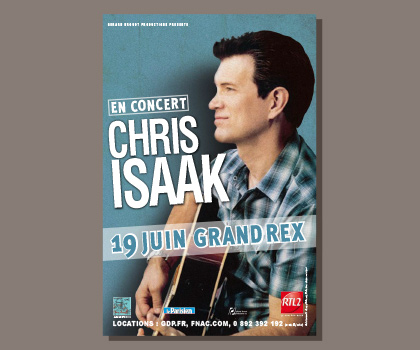 Chris Isaac unveils his fifth album, unanimously appreciated by his peers. He is twice nominated for a Grammy Award and is certified platinum album. The crazy adventure of the Stockton child, son of music-loving workers, continues.

Always as creative and authentic as ever, Chris Isaak offered us a moment of pure happiness. His style is always the same. It is an encounter with an admirable crooner, fascinated by Elvis Presley: what a voice, what a talent. His music is timeless.

Marjorie, after the concert at the Olympia

There is only one Chris Isaak on earth. Like a phoenix, he always rises from the ashes with timeless and unexpected tubes. With his distinctive style, he is now one of the artists you absolutely must see on stage. That's why we take great pleasure in accompanying him.

Chris Isaac has not changed. He hasn't forgotten anything and especially not his musical roots, which he celebrates with his unfailing good humour.

Revealed by a handful of chic hits in the 1980s (foremost among them Blue Hotel and Wicked Game), this American singer has never deviated from his refined style. He is the heir of the performers.