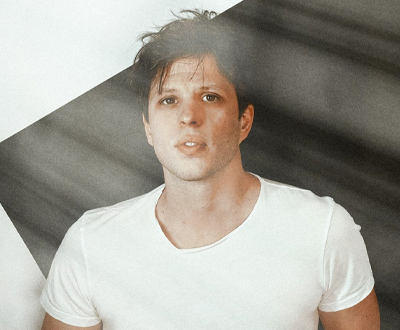 His music is an act of joy. It is as if sculpting his work always makes him happier and taller. It's understandable, and it's shared, because Charles Pasi always gives one hell of a banana when he unfolds his classy, intimate and unblemished jazz. His voice is golden, and his harmonica takes us on board.

A skilled harmonica player, Charles Pasi is a breath of happiness and hope. With his voice bathed in gospel, the French artist has grown up well since the jazz lessons of his youth. Since then, he has become the master of it, making him a worthy heir to Tony Bennett, Al Jarreau and Curtis Stigers. No one can resist his deep, warm and modern voice, which sets all the standards of the music. Here, in the language of Shakespeare, he plays with his charm, likes to surprise and enters our unconscious.

No wonder, for it was while listening to Ray Charles, Neil Young and Bob Dylan that the young Frenchman, at the time a mediocre pupil, decided to throw himself into the deep end. Little by little, he climbed up the ladder, well helped by some first games with a shovel, from Véronique Sanson to the illustrious Carlos Santana. Little by little, he conquered. Little by little, but in giant steps. Because today, Charles Pasi, modest by nature, is one of the contemporary stars of jazz. Sometimes it flirts with pop, the harmonies titillate perfection and it wanders through life on a burning asphalt.

In a way, each record is a page of a diary, as if it needed to deliver its deepest feelings to the world. It's big, it's beautiful. There is no lack of taste. But as some of his most faithful admirers say: "his navel is always just a starting point, never an end". So you know what to expect: absolute class.

First steps on the jazz scene

From mediocre students, he quickly moved on to become an outstanding harmonica player. On this occasion, he made a name for himself by winning the Blues sur Scène springboard, which opened the doors to prestigious jazz festivals, including the Montreal Jazz Festival, where he was to make a splash. Let the adventure begin !

Something is waking up

With a chiaroscuro album entitled Sometimes Awake, Charles Pasi confirms that he is one of the new masters of contemporary jazz. Entirely sung in English, the record, sublime, is a bit the soundtrack of his life. We immerse ourselves in his intimacy, and it feels great.

One more beautiful brick to his discography

Brick by brick, he built his career. So, inevitably, it makes you smile when his fourth album is called Bricks. The media, once again, are overjoyed. Le Figaro will even say: "you listen and you are immediately won over. Delicate, intimate, even if the lyrics are in English".

Fifteen years. Yes, the illustrious Charles Pasi has already been on the most beautiful jazz stages for fifteen years. Fifteen years that he has been dazzling us with his warm voice and harmonica. So, when he presents Zebra, needless to say that no one is really surprised by the album's outstanding quality.

What class when he plays the harmonica. And what about his voice? In short, this concert was simply fabulous. It was class from start to finish. Even his most melancholy songs manage to make us happy. He's a very talented artist, and I'm sure he'll go a long way.

Antoine, after a concert in Lyon

From a rising jazz star, he has become his contemporary master. He is still young, but what a talent: he is a class embodied as few see it nowadays. What a chance to have him among us and to accompany him to conquer the hearts of music lovers in love with beautiful music.

The thermometer had been flirting with 30 degrees all afternoon on Thursday when on the HQ stage in the Rampart Garden, the winners of the springboard kept the temperature steady. As night fell, a breeze from Charles Pasi's harmonica sent a shiver down the spine of the audience.