The last of the bluesmen?
Ecouter 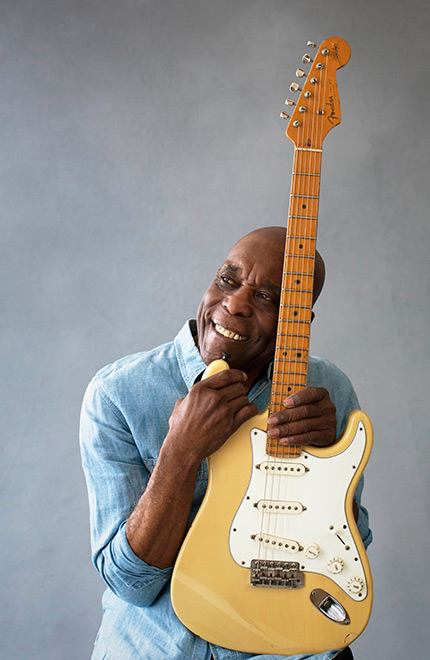 "There is no retreat for the bluesmen! People always give me a warm welcome, and I try to give them as much as I can to make them want to come back and listen to me. I send the best of myself on stage to maintain this exchange ". A life on the road, guitar slung across the shoulder, which has lasted for over 50 years for Buddy Guy. Despite the difficulties, he has never stopped playing.

For the blues literally flows in the veins of this mad musician, whose life is like a novel where chance would have met pure talent to produce music overflowing with feeling. The man who invented the West Side genre doesn't tremble when it comes to sending out riffs and electric notes that break together to form waves of emotion: endurance, sorrow, ecstasy, his strings deliver a palette that only he has the secret to.

A virtuoso visionary, he bends the notes as he pleases, sometimes so far that his audience is on the verge of discomfort, then, when the time comes, he lets the string settle, instantly relieving the tension. For that's what legendary guitarists do: they push the possibilities further and further and they bring out sounds never before heard from their instruments.

Revolutionising the language of the guitar and inspiring other legends such as Eric Clapton or Jimi Hendrix, who grew up with their eyes glued to its chords, he may have got his genius from his musical apprenticeship. "No one ever made me sit down and told me 'B-flat' and 'F sharp'. Most of the people above me - John Lee Hooker, Lightnin 'Hopkins - I faced them, I looked at their hands to see where they were going. They played by ear. And that's how I play now. I don't play by the rules".

A Mac Gyver of the guitar

Bathed in the music of John Lee Hooker and Muddy Waters, the young Buddy Guy builds himself a makeshift guitar at the age of 13 to imitate his idols. Legend has it that he used a mosquito net and a piece of wood. It is only three years later that he finally gets a real six-string guitar.

Chicago's aura was too strong

While he plays regularly in the bars of Bâton-Rouge, Buddy Guy knows that his future is not here. He decides to leave for Chicago, following in the footsteps of the bluesmen of the time. Without a penny, he is quickly spotted by Otis Rush who allows him to play in the city's clubs. Then, consecration, by Muddy Waters himself who will give him some advice.

Buddy Guy comes out of his lair

However, it was not until the end of the 1960s that the singer was a great success. He recorded several albums, A Man And The Blues, Stone Crazy and This Is Buddy Guy in collaboration with Eric Clapton. It is thanks to the latter that he reached a larger white audience and embarked on several triumphant international tours until the early 1970s.

Bad weather for the bluesmen

The 80's are overwhelmed by the new wave, putting almost all the great bluesmen of the time out of the picture. Buddy Guy, who had already been overlooked by the American record companies at the end of the 70s, will however continue to make music, earning almost nothing.

The revival of the blues

The early 90s saw a renaissance for the blues and Buddy Guy, along with Mark Knopfler, Jeff Beck and Eric Clapton, was quick to relaunch his career with Damn right, I've got the blues, for which he won a Grammy Award, one of only eight he has won over the course of his career.

The blue is still alive !

Tireless and at over 80 years of age, the man who is now a legend alongside his youthful idols, BB King and Muddy Waters, has warned: he will never stop. Always inspired, he continues to travel the world to carry the message of his latest opus, The Blues is Alive and Well !

It's an old doggy on stage! The outstanding guitarist, always with this feeling in the back of his voice, regales us once again with a good modern blues. His guitar playing is incisive, inimitable, timeless and it is impossible to guess his (great) age by listening to him. In short, it is always a joy to see him on stage, so much he transmits his joie de vivre!

Samuel, after a concert at Jazz à Vienne

Buddy Guy, one of the greatest bluesmen of our time, always carries at arm's length a story that some people forget a little quickly. Legendary and tireless guitarist, his last concerts still carry the energy of the Chicago of the 60's which saw this artist born and grow up. An immense lesson in music that we hope to see radiating with us for a long time to come.

When he landed in Chicago from his native Louisiana, he was nicknamed "the barbarian" because he played standing when all his peers were teasing the six-string sitting. An anecdote that says a lot about this living legend of the blues whose guitar playing has always been characterised by his aggressiveness and singing, by a feeling full of aggression.