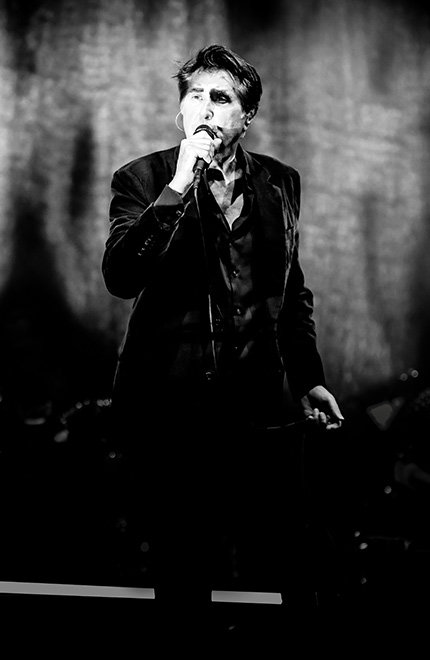 If British elegance were to choose its muse, Bryan Ferry would have every chance of being the lucky one. For the glam rock pioneer and former leader of Roxy Music has always had a gift for creating charming and timeless music.

Sticking a label to Bryan Ferry is always a delicate exercise. Is he a rock dandy, a postmodernist pop icon or a crooner who sometimes dares, when his heart desires, to venture into the land of jazz he loves so much? The complexity of the character, a perfectionist at heart, would tend to tick all three boxes, so much so that his career has brought him into contact with different, yet so complementary, colour palettes.

For the London musician, a pupil of Richard Hamilton at a time when his only dream was to become a painter, likes to try things, sometimes on the verge of the improbable, but always with charisma and finesse. Following in the footsteps of Roxy Music, where he became the forerunner of subtle rock at the height of sex appeal, Bryan Ferry likes to open up new horizons. Beneath his ideal son-in-law's dinner jacket, this romantic with a golden creativity, demanding pen and slightly hoarse voice has indeed, in a way, become a kaleidoscope of influences, going so far as to fearlessly assume his unfailing love for Louis Armstrong and Duke Elligton.

Thus the British artist, the son of humble farmers, climbed the ladder like the mountaineer he dreamed of as a child. From the top, he carries intimate sounds, sophisticated melodies and beautiful words to tell the tale of new and lost loves. He composes his own adventures and even has fun covering the most beautiful songs of his idols. And above all, since elegance suits him like a black suit, he explores the bohemian spirit with mad charm and exceptional soloists, who sometimes include his friends David Gilmour, Jonny Greenwood or Phil Manzanera.

How to react to this young band with a singular look, an original universe and soft sounds, which contrasts with the Sex, Drugs and Rock'n'Roll spirit? The answer won't be long in coming: as soon as the first record is released, the band makes its mark and the audience is there. Many will then consider these English kids as pioneers of glam rock, alongside the illustrious David Bowie. "The other bands wanted to destroy hotel rooms, Roxy Music wanted to redecorate them", Bryan Ferry later amused himself.

Already the soul of a creative loner

If Bryan Ferry is today a legend, it is of course for his leading role in the group Roxy Music, but especially for his prolific solo career. And it's safe to say that the London-based dandy didn't wait long to sign his first album in his own name, with These Foolish Things. On this occasion, he covered songs from the fifties and sixties, including Bob Dylan's A Hard Rain's a-Gonna Fall. At the same time, Roxy Music topped the charts with the album Stranded !

The end of the Roxy Music adventure

At the height of his glory, with the recent release of the excellent album Avalon, the members of Roxy Music decided to put an end to the fabulous adventure for good, Bryan Ferry preferring to focus on his solo career. This time for sure: no chance to see Roxy Music again in the studio. The fans are in shock!

The English crooner makes an impression

Three years later, the English artist presented the album Boys and Girls, on which he collaborated with big names such as David Gilmour and Nile Rodgers. He then achieved a success that few would have imagined possible, with a first place in the British charts. His single Slave to Love left no one indifferent and helped the crooner to gain a reputation that he would maintain brilliantly over the following decades.

There is a time for playing the beast on British stages, and then there is another, that of introspection. With Avonmore, a magnificent album hailed by the critics, Bryan Ferry draws his self-portrait through new compositions of undeniable elegance and even has fun in reworking Robert Palmer's excellent Johnny and Mary. The Inrocks wrote: "Like Bowie, Bryan Ferry suddenly seems to be caught up by his instinct and the desire to end the story in beauty, with languorous songs, a meticulous sound, a voice sweeter than ever".

Once again, the Bryan Ferry gig is flawless: it remains the ultimate dandy! The audience was boiling hot, and his collection of songs, between his solo hits and Roxy Music classics, did not disappoint. So it was a very nice evening.

Xavier, after a concert at the Olympia (Paris)

Bryan Ferry is a real character and the perfect embodiment of the English dandy who takes to the stage to write a timeless story. He marked his time, and continues to seduce us today with his languorous voice, his soberly sophisticated compositions and his sublime covers. So we might as well tell you that when he comes to France, we are always enthusiastic, because Bryan Ferry never disappoints !

Four decades after the debut of his band Roxy Music, the singer continues to embody the sweetness and elegance of British pop. Bryan Ferry does not suffer the ravages of time: he gives the feeling of being the Dorian Gray of rock.

His silhouette and his music have not changed much since the Roxy Music era. Fans will find the familiar swaying of a funk-soul glittering with chrome shards and sweet melancholy. An obsession with formal elegance and clothing that was initially a way for him to escape.