The god of extravagance
Ecouter 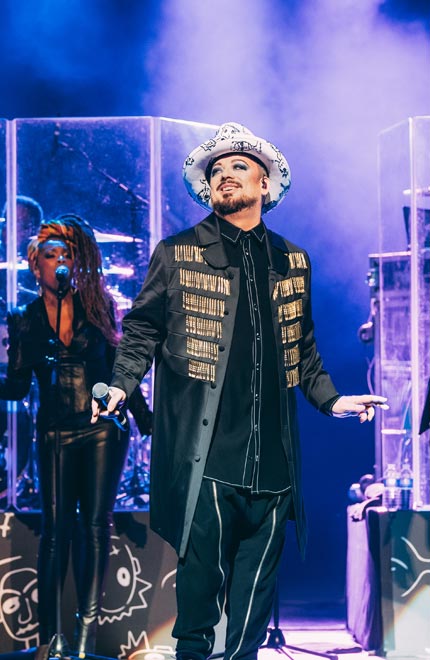 His ascent to glory makes you dizzy. For nothing predestined Boy George, a former squatter in downtown London, to become one of the great icons of pop music. Yet this is what the former member of the band Culture Club has achieved.

Eccentric hat screwed on his head, make-up and black suit: Boy George's attire is as legendary as his music. That's how we love and recognise him. Because the man from Bexley, a gay effigy from the eighties, likes it when it shines. New wave diva, some would say, extravagant pop man, others would say. In the end, it doesn't matter which label you choose, because the showman transports us with his few hits, his goldsmith's voice and his softly rhythmic melodies. It filters between melancholy and joie de vivre, but above all it affirms a carefree attitude that does good.

It is thus the very essence of eccentricity. Finally, could we say that his music is the reflection of his colourful eyelids? Surely, and perhaps that's what saved him from his dangerous escapades of the nineties in the white powder snow that ruins a being in no time at all. So he seems stronger today than ever, and even more prodigious than when Culture Club was invading the dancefloors.

In short, you will have understood: Boy George is an exuberant and atypical character who doesn't like to put water in his wine. What he wants is simply to have fun like an eternal kid, daring the affront with the purists of the well licked pop. In his own way, he makes his way into the big British foursome, alongside David Bowie, Freddie Mercury and Robbie Williams. He tells the story of his life, his hopes, his tears, for however vulnerable he is, he will remain grandiose.

Culture Club at the top of the poster

Interrupted by the punk movement and a fan of underground clubs, Boy George decides to found Culture Club. The success is immediate, with an album that will remain at the top of the pile of vinyls to be listened to over and over again: Kissing to Be Clever. The single Do You Really Want to Hurt Me invaded radio stations and nightclubs all over the world: it remains legendary today. 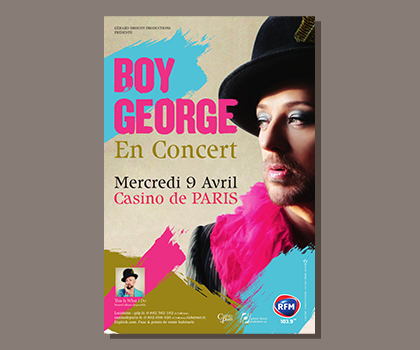 Upstairs, but already in free fall

This year marks the beginning, but above all the end, of a climb to the highest summits. His second album, Colour by Numbers, was a great success. However, it was the beginning of a complicated era for Boy George, where drugs disrupted his ascent. The band splits up and the beginnings of his solo adventure do not live up to his ambitions. 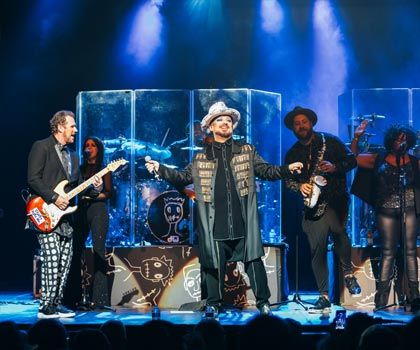 The virtuoso sets the table again

Under his extravagant make-up, Boy George hides a rare perseverance. That year, he presented his new album: The Martyr Mantras. Let it be said, the English artist is back and is back to the success he had during his time at Culture Club. His singles Generations of love and Bow down mister are a hit. 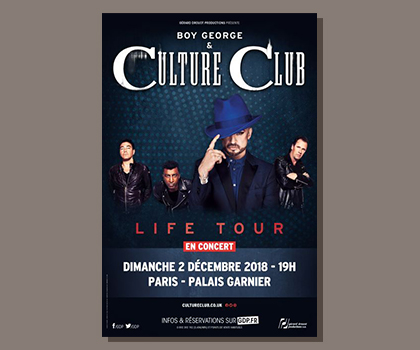 Back with Culture Club

In parallel to his solo career, Boy George decided to resume service with his partners at Culture Club. From now on, he combines the two, as if to recall the good memories of yesterday and preserve, as well as possible, his popularity of today. In 2018, Culture Club will present the excellent Life record, with moderate success. The same year, the group will play at a special concert in the majestic setting of the Palais Garnier.

I like this guy. His music has always animated our hearts. Today, to have the chance to see this joyful extravagant on stage again is a return to the most beautiful hours of Culture Club. We have a great time, it's a great party, with beautiful lights in the senses. In short, it's a show in his image.

Kalhed, after a concert in Istres

Boy George is really special. His music, his look: everything is different about him. That's what intrigues and pleases us. Since the formation of Culture Club, he has known how to build and tie up his character, to make it timeless. Today, he continues, true to himself, with extravagant concerts that give you a thrill.

Boy George, 57 years old, full of charm under his heavy make-up and hats à la Geneviève Fontenay, was deeply funny and sympathetic and put the room in his pocket. It doesn't matter that he finally has less than ten hits in his thirty-year career, he has a sound all his own.