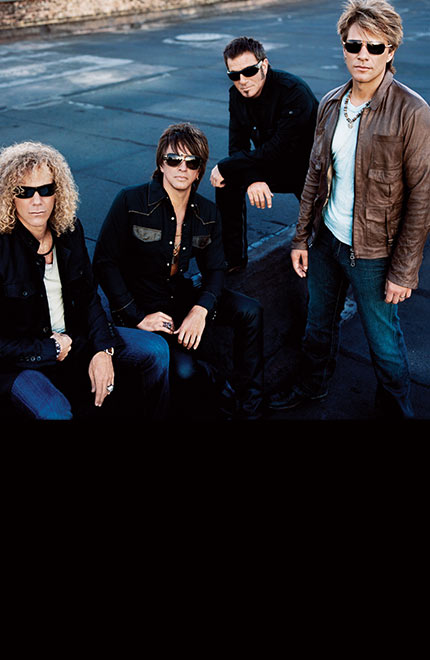 Bon Jovi is the story of rockers with angel faces and a physique made for the cameras. But above all, it's the story of a creative genius who will take these four kids from New Jersey in search of glory to the top of the charts.

Accompanied by Richie Sambora on guitar and Ticco Torres on drumsticks, his charismatic leader Jon Bon Jovi quickly transformed himself into a hard-rock war machine. A rocket with glam-rock, country and blues tones that quickly reached the hearts of Americans and then of the world, propelling his hits among the most listened to hits on the planet.

Those who have often been ignored by the press, sometimes preferring to shed light on the beauty of JBJ's hair or denouncing songs that are too cliché for the demanding hard-rock scene, have nothing to do with criticism. They have their own path, touring, filling venues and stadiums at a frantic pace to tell their stories without any detours. The stories of a deep, working-class, struggling America.

For beyond the dancing and transcendent melodies, beyond the police rock with no alcohol or drugs in its veins, beyond the swaying hips and the communicative energy of its singer, Bon Jovi delivers a deep and committed message, of which the title Livin' on a Prayer, which has become a hymn that has stood the test of time, is a shining example.

Jon Bon Jovi, in a hurry to make a name for himself, had tried to break through in 1982, flooding the producers with his models, but finding the door closed each time. It's while opening for Scandal that they are spotted and sign with Polygram for a first eponymous album, very quickly followed by a second one, which is not very successful, but which allows them to play alongside ZZ Top, Scorpions or Kiss.

The group takes the lead

It is with his third album with the sulphurous name, Slippery When Wet, that Bon Jovi explodes around the world with more than 30 million albums sold. It includes the worldwide hits I Was Made For Lovin' You and Livin' on a Prayer. But it was also the album that nearly killed the band, as some high notes damaged JBJ's voice during the tour that followed.

A break at the top

After the successes of Keep the Faith and New Jersey, the departure of bassist Alec John Such and their extraordinary resistance to the grunge wave that has hit the world, Bon Jovi announces a second pause in the band's career, exhausted by the hallucinating rhythm of their tours. Jon and Richie took the opportunity to relaunch their solo careers before meeting again in 1999 to record a new album.

Bon Jovi crushes everything in his path

Crush is without a doubt Bon Jovi's millennium album. The anthem-like title It's My Life is once again a worldwide success, which was taken up by thousands of fans on a tour of anthology. About 60 dates over a few months were originally planned. It will finally last a whole year!

A goodbye for Richie?

Each group has its empty periods and Bon Jovi's comes late in their career. In 2013, their album What About Now was the lowest selling album in their history. And although the tour that followed this release was a success, it was also the scene of the hasty departure of long-time guitarist and band legend Richie Sambora.

Despite the departure of his guitarist, Bon Jovi continues to chart his own course. After This House Is Not For Sale, Phil X joins the band for a new album with more and more engaged subjects. Weapons, family, politics, as usual, none of the subjects of contemporary America will be spared.

The group's performance is breathtaking. Bon Jovi shows that he is even more powerful live and confirms that he has nothing more to prove. Jon gives the impression to have seen everything, to have taken everything and to be still standing like a puncture-proof pistolero. As much as there was a kind of furious madness emanating from them in the 80's, as much as today they look like wise men who are no longer made to do it. This concert is a demonstration and an authentic rock & roll lesson.

Frédéric after the Bercy concert

Although these kids from New Jersey are no longer young, Bon Jovi's music continues to leave its mark on the world. With more than 2,700 concerts, the group is a veritable beast of the stage. With the New Jersey Tour 88-90, they have completed one of the biggest world tours in the history of hard rock, touring 22 countries in 17 months with no less than 240 dates. In France, their appearances at Bercy are always a sold-out event and we look forward to seeing them there.

Although this type of American-style show leaves little room for improvisation, the fervour, joy and even audacity of the French audience throwing confetti less than a metre away from the singer or calling out for songs has ended up making the show unique. Indeed, provoking the smiles and interventions of the members of the group, amazed to see their fans vibrating so much, the audience got an extra because we were treated to Let it Rock, a rare song, not initially planned but played by the group during the last encore.