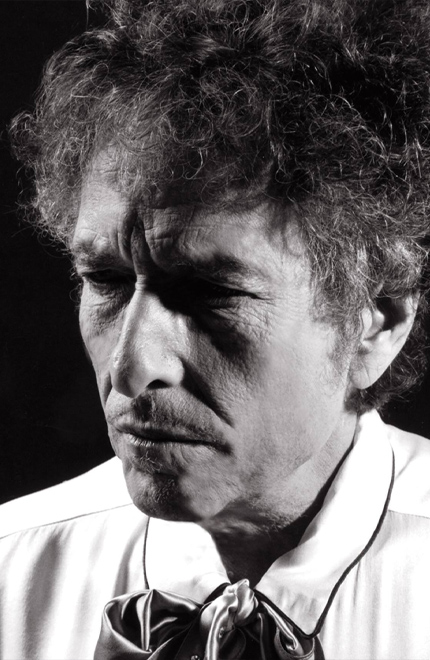 It is very difficult to summarize in a few sentences the immense career of this American icon, Bob Dylan. Musician, painter, writer, sculptor, poet, a career spanning more than 60 years ... He became one of the most important figures of contemporary music, has deeply anchored his time and remains an important influence still today. Even winning the Nobel Prize for Literature in 2016.

Bob Dylan, whose real name is Robert Zimmerman, was born on May 24, 1941 in Minnesota and grew up in a middle-class Jewish family. From his youth, he was fascinated by country music and blues, but also by the rock of Elvis Presley and Jerry Lee Lewis. At the age of 20, he moved to New York in the Greenwich Village neighborhood and adopted his stage name at the same time. If his first album is a failure, the success arrives one year later with the album " The Freewheelin' Bob Dylan " and its two Protest Songs: " Blowin' in the Wind " and " A Hard Rain's A-Gonna Fall ". In 1965, he divided his audience by moving from an acoustic style to electric rock through a trinity of major albums: "Bringing It All Back Home", "Highway 61 Revisited" and the double "Blonde on Blonde", including the title "Like a Rolling Stone", considered one of the most important songs in the history of rock.

In 1973, Bob Dylan played the reporter Alias in Sam Peckinpah's film Pat Garrett and Billy the Kid. The soundtrack of this film contains the song "Knockin' on Heaven Door", which has been used many times since. In 1979, Bob Dylan converted to Christianity and his musical work became more spiritual. His first album of this period, "Slow Train Coming", was released the same year and contrasts with his previous works. Thereafter, the artist will deliver other albums more or less uneven but will remain admired. In 1988, he started his "Never-Ending Tour", which of course had as many changes of musicians as revisited versions of his repertoire.

During the 1990s and 2000s, the artist remains active both on stage and on record ("Time Out of Mind" was awarded 3 Grammy Awards), revisiting both blues and jazz and constantly renewing himself. On October 13, 2016, the Nobel Prize in Literature is awarded to Bob Dylan for having contributed to the creation of new poetic expressions through his musical work. The artist, surprised, takes time to approach the Swedish Academy and only accepts the Nobel Prize on June 4, 2017 before the prize slips away.

If Bob Dylan was inspired by the Beat Generation or Rimbaud, he was the inspiration for many artists such as Lou Reed, the Beatles, Bruce Springsteen, Patti Smith or the White Stripes.