Glam Metal made in France
Ecouter 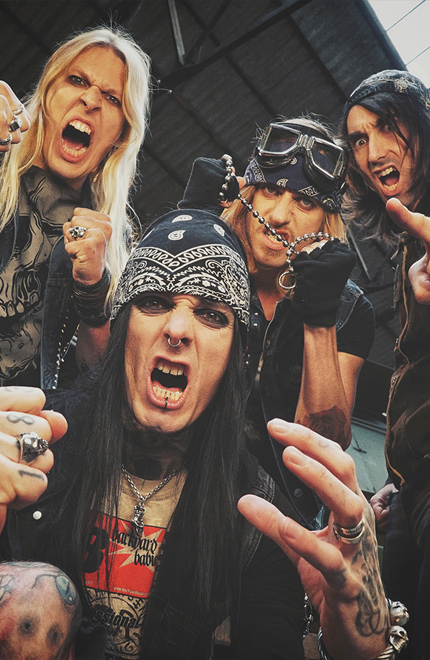 Formed in 2001 in Haute-Savoie, the band BlackRain distills hard rock influenced by the Sleaze scene of the 1980s. After acclaimed albums in Europe, which led the British magazine Classic Rock to rank them among the "10 best French rock bands of all time", the adventure continues with new compositions to come!

20 years after its formation, the band is currently composed of Swan Hellion (vocals, guitars), Axel "Max 2" Charpentier (guitars), Matthieu de la Roche (bass) and Frank Frusetta (drums). The band was signed to Thundering Records in 2006 and, thanks to a friend of theirs who owns several clubs in Tokyo, they set off on their first tour of some twenty dates in Japan. And the reception they received was more than favourable! On their return, they released their first eponymous album, which was acclaimed by the critics. Their second album was released in 2008 and was entitled "License to Thrill", which sounded more glam rock. The record was critically acclaimed and allowed the band to play concerts all over Europe.

In 2012, they were noticed by the whole of France thanks to their appearance in the show "La France a un incroyable talent" and finished fourth in the final of the show. At this time, the band is in the studio with Jack Douglas (John Lennon, Aerosmith) for the recording of their album "It Begins", which will be released in 2013 by Columbia Records and will benefit from an important promotion campaign. The band will notably headline at the Bataclan.

Following this ever-growing success, the band decided to part ways with their producer and decided to call on crowdfunding to finance the production of their new album. They launched a call for donations via the Pledgemusic platform and the funding was completed in just 20 days, allowing the band to reunite with Jack Douglas in the US and record the new album. The album will be released in 2016 under the name 'Released'. If the band still wants to evolve and presents itself in a less glam style than usual, it promotes this new opus in the biggest festivals with a noticed passage at the Download Festival in Paris (opening for Iron Maiden). And the success continues with the album "Dying Breed" which is a commercial and artistic success.