Blueswoman with an open heart
Ecouter 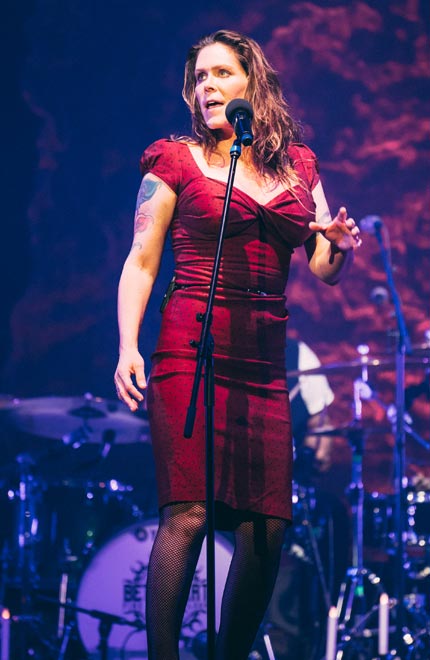 Beth Hart is a three variables equation, like a powerful intersection point between the strength of blues, the fire of rock and the wisdom of jazz. Behind her husky and seductive voice, the American artist has become the symbol of female virility.

Piercing gaze, dazzling voice. Beth Hart's vocal flights smell sweetly of America. Behind her piano, the blues superwoman plumb the depths of her soul to nurture a fanciful getaway to the heart of California and Nevada. With absolute elegance, the protégée of Rob Cavallo, the man in the shadow of Green Day and My Chemical Romance, takes the stage with strength and conviction, leaving her natural shyness backstage.

Sensual, energetic, intoxicating: the heiress of Eric Clapton and Janis Joplin, who admires Billie Holiday and Aretha Franklin, shapes a powerful universe, softened by accents of jazz coming straight from the New Orleans. She is an iron voice in a velvet glove, brilliant melodies emanate from the deeply emotional Las Vegas crooner and confirm her raw and highly singular personality.

Let's say it clearly : every time she appears on stage, the woman who has worked with the greatest, from Joe Bonamassa to Slash, delivers authentic and eclectic sounds whith her timeless voice, one of the most beautiful on the other side of the Atlantic. And when the gentle ballads strike with an overflowing quirky energy, the result is an explosive mix of class, sincerity and coolness!

At the age of 24, and after several years of refining her style in the clubs of Los Angeles, Beth Hart released her first album: Immortal. Her career was launched.

THE Song to take off

Beth Hart had her first real success with the release of the single LA Song on the album Screamin' for My Supper. With her sensitivity and her extraordinary voice, the goddess of California became a rising rock and blues star in the US. She won over the hearts of her American audience .

On March 28th, the dream came true. Beth Hart concert at the Olympia in Paris was sold-out, she set the crowd on fire with her sublime voice, subtle seduction and endless energy. Her mother even made the trip for the occasion. This was the beginning of a successful French tour !

From the war of emotions

War in my Mind is the latest in a series of 10 albums. It is a delicate work in which Beth Hart with her hypersensitivity and her emotions just under the surface, recounts her demons, her illness, her family and her wounds. Her humanity and honesty are are deeply moving and fill the soul, confirming her status of queen of modern blues-rock.

This artist cannot be labelled : a phenomenal voice, a wild energy on stage and a lot of emotions and sharing. From the rock songs to the jazz ballads, Beth Hart sings with an open heart, she even spoke to us like old friends between each song. It's a performance we won't forget.

Beth Hart is a unique artist in the world of music, be it her background or her personality. Promoting this artist all over France seemed the natural thing to do. We really wanted to allow the French audience to discover the exceptional universe of the American singer and multi-instrumentalist. She surprised us again at the beginning of 2020 by performing solo, then with her band, at two memorable concerts at the Olympia.

In Paris, at the Palais des Congrès, Beth was not put off by the size of the place, delivering as usual a lively performance, freely talking to the audience and sharing with them many personal anecdotes.

The American singer wasn't revealed to the public until the age of 40. She has one of the most powerful voices of her genre. Very impressive on stage, Beth Hart is a passionate and intense performer.

2021
1 concert
2020
5 concerts
2019
2 concerts
2018
8 concerts
2016
10 concerts
2015
9 concerts
2014
11 concerts
2013
13 concerts
2012
9 concerts
See more
Book now
Remonter
gérard drouot productions uses cookies on this website. With your approval, we will use them to mesure and analyse your visit on the website (statistic cookies) to adapt it to your interests (customized cookies) and to provide you with relevant information (third party cookies). Customize
Loading