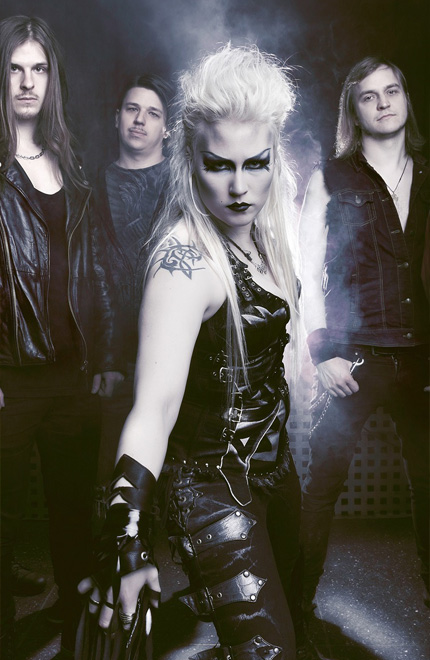 In their fifteen year career, they have become a reference in the Power-Metal style and play sold out concerts all over the world. Battle Beast is a tornado from the Nordic countries, thrilling the audience at every concert, starting with the Wacken Open Air in 2010, winning the Metal Battle Contest. Since then, nothing can stop the Finns!

Founded in 2008 by Eero Sipilä (Bass / Vocals), Pyry Vikki (Drums), Juuso Soinio (Guitar), Anton Kabanen (Guitar / Vocals), Janne Björkroth (Keyboards) and Nitte Valo (Vocals), the band signed a contract with Hype Records to produce their first album ("Steel"), which was released in 2011 and then re-released by Nuclear Blast Records the following year. The production is neat, recalling the great hours of heavy metal of the 1980s.

A European tour was then launched with Nightwish for the Imaginaerum European Tour in 2012, but in September, the singer Nitte left Battle Beast and was replaced by Noora Louhimo. Very quickly, a new self-titled album was recorded and released in 2013 still on Nuclear Blast Records, then two years later it was "Unholy Savior" that saw the light of day. Unfortunately, soon after, the band had to face the departure of Anton Kabanen, due to musical disagreements. He was replaced during the concerts by Ossi Maristo and Joona Björkroth. The latter will become an official member in 2016.

On 14 December 2015, the band announced to go on tour with Powerwolf as part of the Blessed and Possessed Tour 2016. On 24 November 2016, details were revealed about their fourth album 'Bringer of Pain', which will be released in 2017. Subsequently, the band goes on tour for the first time as a headliner on the Bringer of Pain Over Europe 2017, along with Gyze and Majesty. The tour kicks off on 2 March 2017 in Mannheim and goes through cities like Leipzig, Barcelona, Paris (at the Petit Bain) or London.

2019 sees the release of 'No More Hollywood Endings', a mix of power ballads and heavier tracks where it is hard not to tap your foot! This range of styles shows that the band's creativity has no limits. We are only waiting to hear all this live, so let's meet up, dear headbangers!