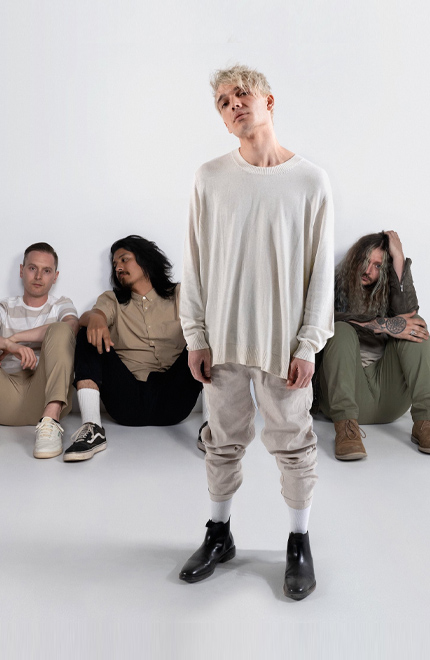 Since forming in 2013, Badflower, consisting of vocalist Josh Katz, guitarist Joey Morrow, drummer Anthony Sonetti, and bassist Alex Espiritu, has toured continuously across the United States and beyond (including England), confirming their reputation on stage. Their 2018 single "Ghost" has racked up over 40 million listens on Spotify! This already gives them the title of rising star of alternative rock.

After playing together for a few years and writing a few songs, singer-guitarist Josh Katz and guitarist Joey Morrow formed the band Badflower. Bassist Alex Espiritu and drummer Anthony Sonetti joined the band soon after. They play regularly in Los Angeles, especially at the Key Club. After a performance on the legendary Troubadour stage, opening for Kongos, the band signed with the former independent label Hundred Handed and recorded their first EP. Shortly after, the band flew to Europe with the Australian pop duo The Veronicas. In the United States, the band performed with Billy Talent.

The band attracts the attention of radio stations, which begin to play "Animal" regularly, which is #1 on local KROQ sections for several consecutive weeks. In 2016, their second EP, named "Temper" was released: a few songs from this EP also appear on Spotify's most listened-to playlists. Their debut album, "OK, I'M SICK" was released in February 2019. The record was praised by critics, calling it accomplished and melodic. The band then performed their first headlining concerts in France, with a stint at La Maroquinerie (Paris) and La Laiterie (Strasbourg) during 2019. More recently, the band released the singles "30" and "F*ck The World", undoubtedly the beginnings of a new opus already highly anticipated!