Rock on the skin
Ecouter 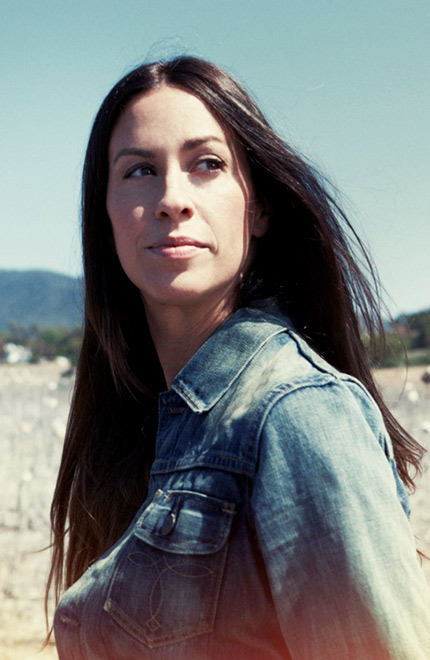 Alanis Morissette is sensitivity and belly rage that meet in an explosive rock mix. Since the 90s and her album Jagged Little Pill, she has been bewildering with her authenticity and the sincerity of her lyrics. To listen to Alanis Morissette is to plunge into the torments of a soul with universal questions, "to explore in an unwavering way emotions so common that most people would be ashamed to express them".

Her hoarse voice and vocal power were destined for rock, yet the young woman had to show boldness and character to find her way. It was after two albums under a pseudonym that she radically changed her path, preferring guitar riffs to the dancing pop that opened the doors to success. For Louis Bellavance, "she was ready to turn her back on a commercial success in order to be held in high esteem". A risky gamble in a rather masculine environment but which paid off for this rocker who is now a reference worldwide.

And if Alanis Morissette provokes so many emotions, it is because she dares to talk about everything. From domestic violence to her frustrations or love failures in her first album, to drug or alcohol addictions in her more recent songs. These are often dark or taboo subjects that she takes to heart. In her interviews, she also talks openly about her post-partum depression or sexual assaults in the music industry following the MeToo movement.

The woman who was talking to teenagers 25 years ago has changed, matured, grown up, but without ever losing that cheeky flame, that soft emotionalism and dancing energy that still makes her successful.

There are people who have an innate talent. This is the case of Alanis Morissette who, at the age when one barely leaves the sandbox, wrote her first song under the encouragement of her parents. Little Alanis has a lot of ideas since, with the money she earns by hosting a children's television show, she records this song on her first album. The birth of a star!

After a few musical wanderings in Canada, Alanis Morissette settled in Los Angeles. There she met Glen Ballard. Between the producer and the singer, it was love at first sight. They immediately set to work, Glen grabbing the guitar while Alanis improvised the lyrics. Legend has it that the song Perfect was written in just 20 minutes. The result was the album Jagged Little Pill, which remains the artist's biggest commercial success to date, selling over 30 million copies. Critically acclaimed Rolling Stones magazine describes an album "close to perfection" where Alanis Morissette "uses her sober voice to navigate through the emotional wreckage of her youth with enough heart and writing quality to thrill countless listeners".

Alanis is a screenwriter

Just before the 2000s, the singer appears where you wouldn't expect her to by launching herself into the cinema. She landed a role in Dogma and appeared in Sex and The City. On the music side, she shows once again that she's not shy with the Grammy Award-winning video clip of Thank U. She appears naked to show that being vulnerable is also a strength, provoking a little controversy along the way.

A comeback for the rock prodigy girl

After eight years away from the music scene, the singer finally releases Such Pretty Forks in the Road, a new album whose single Reasons I Drink is, as usual, fierce and full of passion. A raw, ineffectual voice and a haunting lyric that strikes with its invigorating energy.

Hallucinating will be the word of the evening. Alanis Morissette literally sent me into another world. A spectacular voice and unbridled musicians for this artist that I have been listening to over and over for years. After a few missed appointments, I'm happy to have waited so long for all the emotions I felt tonight.

Arthur, after a concert at the Théâtre de Plein Air in Colmar

Alanis Morissette is certainly one of the precursors when it comes to rock music for women. Her communicative energy, her overflowing sensitivity, her intimate lyrics and her touch of impertinence always make her concerts a moment full of vitality, warm and dancing.

Contrary to some of her favourite subjects and dark lyrics, Alanis Morissette charms the audience with her playfulness, making fun of her Canadian origins or the fact that she hears nothing of what the crowd is trying to tell her. She is clearly no longer the anguished young woman who wrote "Jagged Little Pill", although judging by the pieces chosen for her concert, the audience definitely needed a dose of nostalgia.