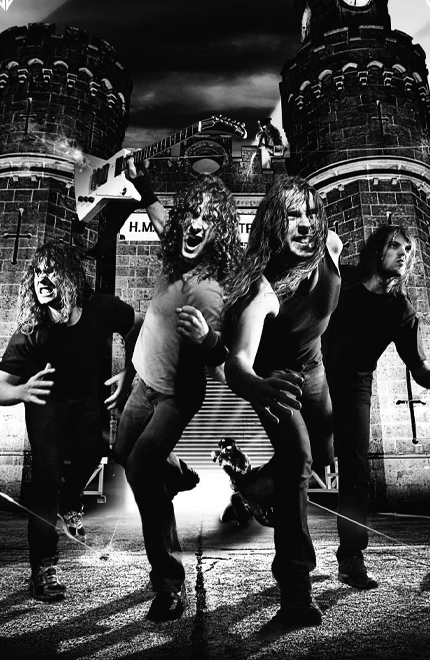 Since their first album in 2008, the Australian band Airbourne have built a strong reputation on the current hard rock scene. Their concerts are explosive and the decibels are flying! The band, founded by the O'Keefe brothers, is undoubtedly one of the best contenders to take over from AC/DC. Effective guitar riffs, catchy choruses, we are ready to rock and it will shake!

In addition to being Australian, there is another important similarity with AC/DC: the band was founded by two brothers, Joel and Ryan O'Keefe. Joel was barely 10 years old when he discovered rock music, thanks to the records of Rose Tattoo, AC/DC or Billy Thorpe. This passion is also transmitted to Ryan. When Ryan started playing drums at the age of 11, his older brother had already been playing guitar for four years. Soon, they wanted to start a band with other musicians. They met David Roads (guitar) and Justin Street "Streety" (bass), with whom the current seems to pass wonderfully. The four musicians decided to move to Melbourne in 2003 to try to launch their career.

For a year, they will play pubs and small venues before releasing a first EP called Ready to Rock and opening for Magic Dirt, The Living End or Mötley Crüe. In 2006, the band goes to the United States to record its first real album with Bob Marlette (Alice Cooper, Black Sabbath, Black Stone Cherry...). Afterwards, it will be up to Andy Wallace (Jeff Buckley, Nirvana...) to mix the album. After a contract with the label Roadrunner, Runnin' Wild is released in Australia in June 2007, then in the United States and Japan in January 2008 before arriving in Europe in June of the same year.
The reception is enthusiastic, despite the recurrent comparisons with AC/DC. However, this does not bother the band, quite the contrary! Joel O'Keeffe explains in an interview in September 2008: "To be compared to the best rock'n'roll band in the business, which is still active and is now about to release another album, there is no better compliment. After a first world tour, the band embarks on the conception of a second opus. It will be called No Guts, No Glory and will be released in March 2010 on the Roadrunner label, the following month in the United States. The release of the album is once again followed by a successful world tour. They then perform in the best rock festivals worldwide. In 2014, they receive a warm welcome at Rock en Seine despite the difference in musical aesthetics with other artists present that day (Lana Del Rey, Selah Sue, Tinariwen ...).

Release of the albums Black Dog Barking (2013) and Breakin' Outta Hell (2016), the latter seeing the band reunite with the producer of the beginnings, Bob Marlette. This is also the first album released after signing to Spinefarm Records. As has been the case since their debut, the band and their technicians preferred to record "old school," on tape as well as on the same Marshall amplifiers they used on their tours. In April 2017, the band announced the replacement of David Roads by Matthew "Harri" Harrison, and 2019 saw the release of Boneshaker.

The band comes regularly to play in France, whether in theaters (La Cigale, Olympia, Trianon) or in festivals (Hellfest, Beauregard, Rock en Seine). Airbourne in concert is lived: a rock'n'roll howling, which makes sing and tap the foot immediately. Not to mention the charisma of Joel O'Keefe, who runs and even climbs the balconies! You've been warned!