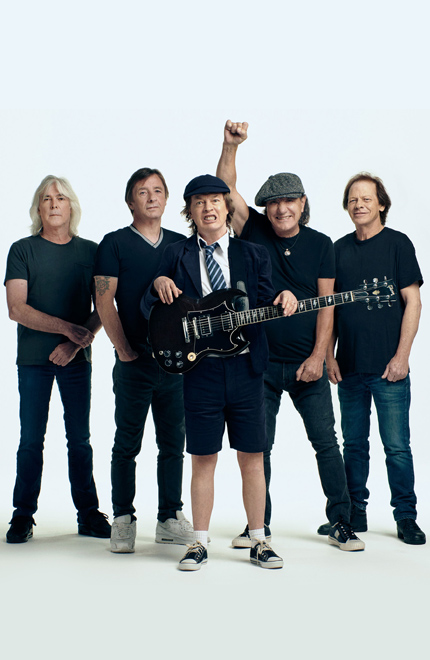 Stage animals at heart, Australia's enfants terribles continue to electrify crowds, like the conductors of an eternal pogo. Here, the hits will always resound, in a clash of over-vitamined hard-rock.

AC/DC is a hit machine, capable of sucking up everything in its path, like a surge of raw energy with a happy and communicative rage. When the cold rain of Glasgow meets the hot blood of Sydney, the thunder rumbles. Because yes, this mythical band is an electric field: each riff transpires lightning, each cry transmits shivers.

With AC/DC, everything is a flash of genius. As if to justify Angus Young's disheveled uniform, the guitars escape from conventions, the bass releases the brakes and the drums vibrate to the rhythm of the typhoon. Everything is there to euphorize the man in the middle of the arena: Brian Johnson, ball of energy and pillar of the group since the flight of Bon Scott, in 1980. Because by leaving this world too soon, the emblematic singer of the band entered the legend. T.N.T. was him. Riff Raff, it was him. Highway to Hell? He was too. And if the very good albums followed one another after his death, no fan has forgotten him.

And despite the adversity, these living legends of rock, authors of 20 breathtaking albums, sold more than 200 million copies worldwide, have continued to demolish the standards with the eternal Back in Black. For 50 years, they've been doing it right on stage. More than a show, an AC/DC concert is a communion, like the rite of an established religion: rock. Under the bells of Hells Bells, let the mass begin!