Accueil A Place To Bury Strangers

The intense and exhilarating Noise Rock from New York City 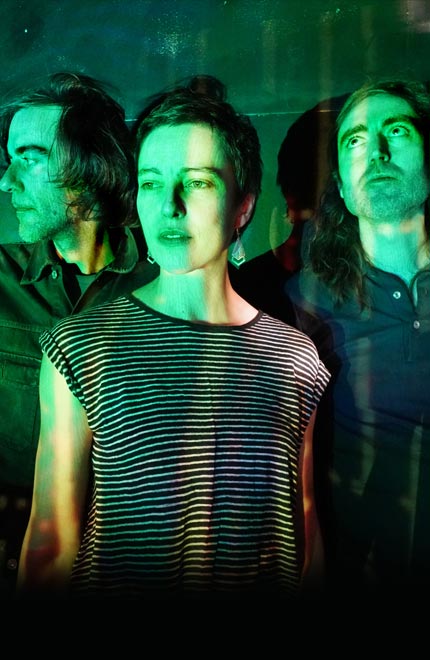 A Place to Bury Strangers (APTBS) has often been called "the loudest band in New York". And for good reason, the band's music oscillates between a powerful sound and psychedelic, shoegaze and space rock influences. Big fat US sounds enthusiasts take note !

Formed in 2003, the band's name was inspired by a poem by Aleister Crowley called "Aceldama: A place to bury strangers in". The band was founded by Oliver Ackermann, who had already made his first steps with the band Skywave. He joined forces with Jay Space and Jono Mofo, former members of the band Mofo. After several changes, the band curren  line-up consists of Oliver Ackermann, Dion Lunadon and Sandra Fedowitz. In 2007, the band released their eponymous debut album and gained attention in the US after a laudatory review by Pitchfork magazine. The band cut their teeth by opening for Black Rebel Motorcycle Club, Nine Inch Nails and MGMT.

The albums follow one another: "Exploding Head" (2009) and "Worship" (2011) lead to world tours where they are noticed for their communicative energy. In 2016, their drummer Robi Gonzalez decided to stop touring and was replaced by Lia Simone Braswell and eventually Sandra Fedowitz, allowing them to record new tracks and to start touring again. The changes in the line-up over the years have allowed the band's music to evolve, especially by adding electronic sounds, like the song "Never Coming Back". The latter bears the mark of Lia Simone Braswell.

As Oliver Ackermann points out: "There is nothing worse than stagnation. When a project is more than ten years old, it becomes very difficult to move things forward. We try to constantly get in motion, whether it's through the live shows or our work in the studio. We're always trying to surpass ourselves. We really had to push ourselves to make it work. I believe we've achieved that."

Today, the band continues to come up with new material and to explore new sounds. We can only recommend noise rock fans to go see the band and enjoy the live experience !